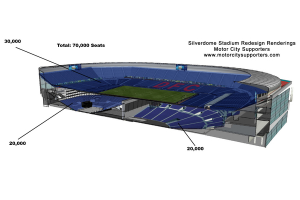 One of the things that makes the constant MLS expansion chatter so intriguing is the tantalizing stadium plans that pop-up in concert with the bids. Detroit might not top most people’s list of candidate cities for an MLS franchise, but their stadium plans, if these renderings are accurate, are top-notch.

The group behind the MLS expansion bid in Detroit, a Toronto-based family real estate company, scooped up the unused Pontiac Silverdome (former home of the NFL Detroit Lions) for a paltry $583,000 back in 2009. The plan was to renovate the building into something that could lure an MLS team to the area. Since the purchase, the Silverdome’s new owners have staged international friendlies and Gold Cup matches in an effort to prove the efficacy of Detroit as a soccer market. But since the structure is ill-suited to being the home of an American team as is, the group made known their concept of a multi-purpose venue with three distinct arenas.

Yesterday, Motor City Supporters, a fan group leading the campaign for MLS in Detroit, posted an image of the plans for the new Silverdome. The plan would turn this:

The roof would also be changed, turning the dome into an open-air stadium.

The cost for this type of transformation would seem to be astronomical, but we’re crossing our fingers it gets done just because it looks amazing. In the meantime, we could do with some more renderings.