While Hans Backe is joyfully plump, has the wide-eyes of a teenager, and wears short-sleeve button down shirts on a regular basis, he isn’t quite Sweden’s favorite sporting son. That title doesn’t even fall within the sport he coaches.

In his short but illustrious career, Bjorn Borg earned that mantle with his flowing locks and powerful backhand. On Saturday the Red Bulls coach took the trip to one of the birthplaces of New York City soccer, Randall’s Island, to meet Borg and his fiery on-court adversary John McEnroe.

“He has to be the most well-known Swede outside Sweden,” said Backe. “I think no one can compare with him. He’s still a huge name and you can see that by the number of media that attended the press conference yesterday. All over the world, he is recognized if you just mention his name.”

Borg and McEnroe, who were featured in HBO documentary titled ‘Fire and Ice’ earlier this year chronicling their epic rivalry and friendship, both have a strong passion for the game of soccer.

“I played soccer right here (on Randall’s Island) when I was a kid,” said McEnroe. “Not far from where our Academy now is, and this is the place where Pele came to play for the Cosmos, so I’m a great fan of the sport and I hope he enjoyed watching us play. I love soccer.”

Borg echoed the feelings and admired the support from Backe, even with his busy schedule.

“Soccer is one of my passions, there is nothing like it as a team sport,” Borg said. “And I was glad a fellow countryman could come from his busy schedule just to meet me. It was very nice to see him and accept the Red Bulls jersey.”

The two tennis stars were presented with personalized Red Bulls shirts and smiled nice and pretty for the camera. 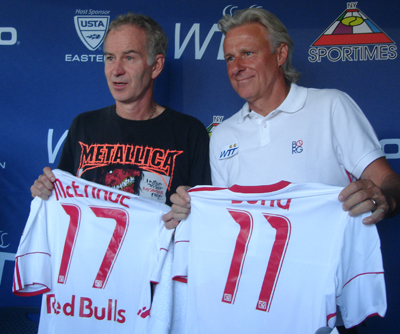 The Jonas Brothers Must Have Been Out Of Town