Ireland, if you were unaware, did not qualify for the 2014 World Cup. Hell, they didn’t even make the playoffs in Europe. Robbie Keane and company will sit home next summer and rue their missed chance. But that doesn’t mean their fans have to wallow in failure. Like the Belgian fans before them, Ireland fans are adopting another nation as their own, a nation that still has an opportunity shock the world and qualify for Brazil. That nation is Iceland, because it’s just one letter away from “Ireland”, you see.

The campaign for fans of the Boys In Green to instead root for the Boys in…Blue? Yeah Blue…is laid out at countyiceland.ie.

Upon arrival, the site says “Come on Ireland” on a green background. 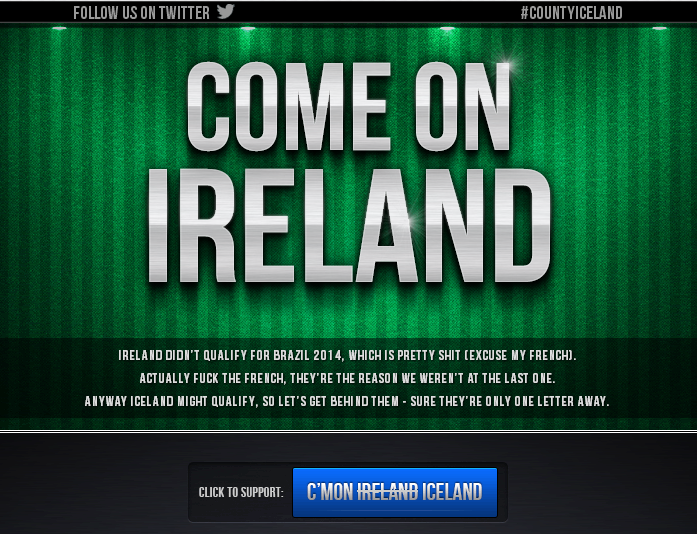 But if you wait just a second, or click somewhere on the page, it changes to “Come on Iceland” with a blue background. 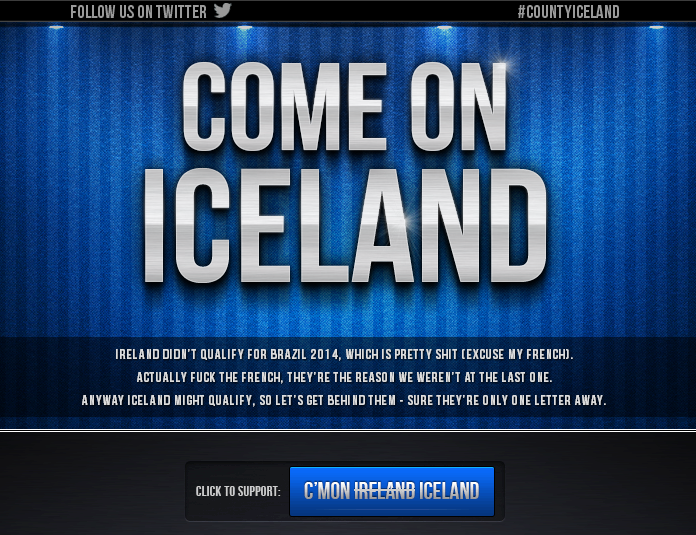 The plea, and the necessary rant against the French, doesn’t change. Because the French.

So far, a little over 5,000 people have pledged to support Iceland as “Lars’ Blue Army” (named for Iceland head coach Lars Lagerback) in their battle for World Cup qualification against Croatia. A countdown clock counts down the days, hours, and minutes until the first leg of the playoff between the two nations, which happens on Friday in Reykjavik. “Reykjavik” is spelled “Regkjavik” on the site for some reason, but that’s okay because it’s the thought that counts.

The site goes on to list the players for Iceland, complete with added Irish “O’” in front of their names, as well as provide easy chants converted Ireland fans can do that replace the usual “green” of Ireland for the “blue” of Iceland. Makes sense.

We can definitely get behind this campaign here at KCKRS, though our only real concern is that “Fields of Akureyri” doesn’t quite have the same ring to it. Depending on how you pronounce that.