May The Fourth Be With You: Philadelphia Union To Hold ‘Star Wars Day’ For Game Against The Seattle Sounders

In what will undoubtedly be known through the balance of history as the greatest coming together of soccer and scifi nerds in the annals of the world, the Philadelphia Union have announced that their match on May 4th against the Seattle Sounders will be “Star Wars Day.” Events for this momentous day (May the 4th is a “holiday” among Star Wars fans because of the similarity of “May the 4th” and “May the Force”) will include a Jedi costume contest and the sale of limited edition “May the Force Be With Doop.” t-shirts. Just $150 each!

First, the bad news: no lightsabers allowed. Stadium policy bans both real weapons and fake weapons from a galaxy far, far, away, so you’ll have to leave your Ton-ton slicer at home.

Now the good news: The winner of the Jedi costume contest gets to go on the field to be part of the pregame ceremonies! Because that’s entirely cool and not at all embarrassing!

The Union are casting the Sounders in the role of the Empire (naturally).

Join Philadelphia Union as we go galactic with our Star Wars theme game Saturday May 4th at 4pm. “May the Force be with Doop” as we take on the Emerald Empire of the Seattle Sounders. Take a look below to see the great offers and activities that will be happening during the day.

But wait, that boring old text is boring. It would be much better if it was flying through space.

The “May the Force Be With Doop” t-shirts will be on sale the day of the game for $150 each, with all profits benefiting the team’s charitable arm. Which makes the price point okay, I guess. 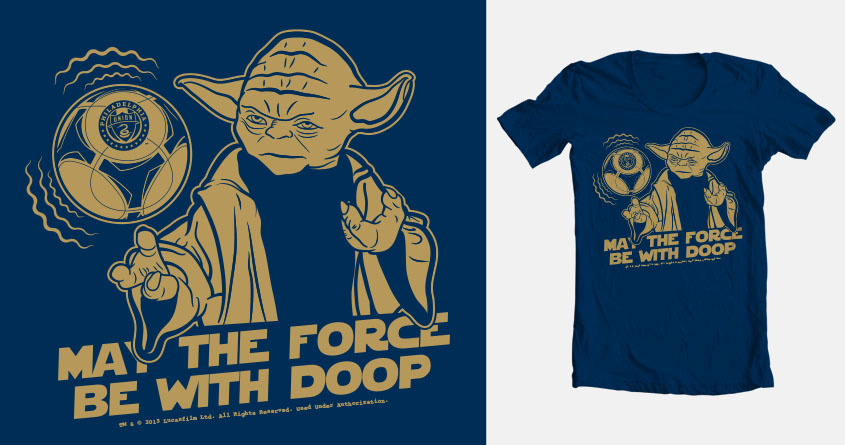 For more information and to buy tickets for this landmark coming together of soccer and George Lucas’s merchandising powerhouse, visit PhiladelphiaUnion.com.