It’s difficult to blame professional footballers for being a bit odd. From a very young age, they’re given huge amounts of money and attention, all the while being told that they’re either brilliant or terrible, sometimes both in the same day, depending on some very subjective criteria.

While the more colorful characters of the English Premiership (Joey Barton, Mario Balotelli, Emmanuel Frimpong) dominate most coverage, we shouldn’t ignore the more interesting personalities in our own backyard.

Take Brek Shea for instance. Shea is more than just an American fan’s excited fever dream, combining athleticism with technical proficiency and an eye for goal. He’s a painter. And not in the faux-intellectual charade way of Joey Barton. He’s actually pretty good (And donates much of the proceeds to charity):

His recent Q-And-A with US Soccer also reveals some interesting tidbits. While we already knew about the hair…

“People have named it a ‘faux-hawk’ type thing but I don’t know. I guess it’s a version of a Mohawk, but it doesn’t really stick up because it’s so long. I just don’t like normal haircuts. Since I was a kid I’ve always done stuff a little different. I’m not really sure why, but I just like to do whatever I’m feeling. There’s not much thinking involved.” 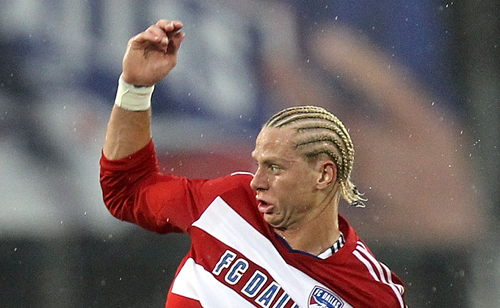 (We’ll give you a moment to recover)

…we did not know that he sports a tattoo.

“It means ‘Freebird’ in Hindi. I do what I enjoy and don’t really think about it. I was just going to put Freebird in English, but I saw my mom and she sent me ‘Freebird’ in a bunch of different languages. She liked that one the best, so that’s what I did.”

Which is quite the mix of “Good Ole Boy” and “Transcending His Plane of Existence.”

Oh, and he thinks Kisuke Kimura is the best defender in MLS because he sticks to Shea like it’s nobody’s business.

He gets it in his head before a game that his opponent won’t beat him. He takes it very personally. He’s always there, no matter where I go. He’s so feisty and can run all day. He’s definitely a good player and my least favorite to play against.”

No comment on what he thought of the tumblr fanfiction written about him.

If You Didn’t Want To See Mike Ashley Do A Striptease, This Post Isn’t For You