DRINK FROM THE MAGIC CUP AND BE MERRY. JUST DON’T DRINK THAT STUFF MADE BY THE SPONSOR.
The magic of the FA Cup is alive and well, you just have to put in a little effort to find it all. Here are five reasons the magic isn’t dead. // The Footy Blog

SPEAKING OF THE FA CUP…
The FA Cup is not only magical, it’s an excuse to pay attention to ahem – eye candy – you might not have noticed otherwise. You know, if that’s your thing. // Kickette

OOH..FRENCH. HOW CLASSY.
The NASL’s Minnesota entrant has a new name and logo. As long as they keep up the Oasis singalongs, people around here won’t care what the logo looks like. // IMS 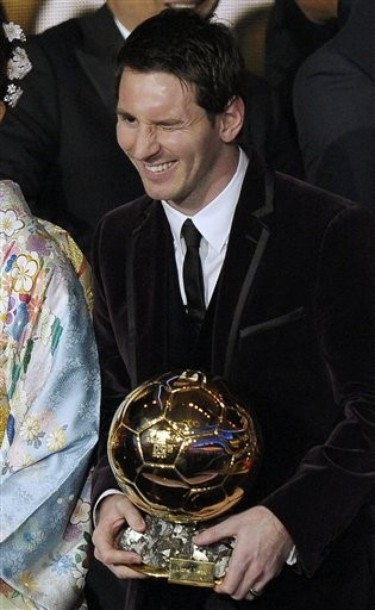 PHOTO: MESSI IS KINDA OF THAT GUY. YOU KNOW, THE FINGER PISTOL PARTY GUY.
Lionel Messi and his jacket accept the Ballon d’Or. The wink to end all winks. Looks painful, actually. (AP PHOTO)

TECHNICALLY, THIS WAS A EUTHANIZATION.
Told ya something was happening over at UF. Now it’s gone. Go read the goodbye, then read everything that came before the goodbye. // Unpro Foul

*FURIOUSLY CHECKING TWITTER FOR THAT HASHTAG*.
The unfortunate coming together of an Arsenal ball boy and an advertising hoarding. Naughty words, heh heh. // Off the Post

LIKE FOOTBALL WITHOUT LIKING FOOTBALLERS. THEY DO MAKE IT EASY.
Steven Gerrard’s life, like those of his underachieving English footballing generation, isn’t all sunshine and rainbow puppies. Of course, these things are relative. // When Saturday Comes

REVOLUTION AND FOOTBALL.
The role of soccer in the Arab Spring revolutionary wave and what those revolutions might mean for the sport in the three countries. // IBWM

UNDERESTIMATING BIG BAD BRAD, ARE WE?
Brad Friedel will be 41 by the time this season ends, which leads to speculation about who might replace him. Meanwhile, expect Friedel to play until he’s 50. // Bleacher Report

NEW CAREER PLAN: DO REALLY WELL SOMEWHERE, LEAVE FOR AWHILE AND LET EVERYONE THINK YOU’RE PAST IT, THEN DRAMATICALLY RETURN AND DO SOMETHING GREAT ON THE FIRST DAY.
What a brilliant plan. I think I’ll get right on that. I’m not sure if I’ll shoot for the statue, though. That seems like too tough a mountain to climb. Do that thinkg where you get all of our Twitter updates, and also do that thing where you get all of our Facebook updates. Au revoir.

adidas Launches An All New adiPure With The 11Pro