PHOTO: SAMI, I DON’T THINK THAT’S GOING TO WORK.
Sami Khadira and Germany did that thing where someone pulls out another sport’s ball and the team plays with it like it’s a soccer ball. Fun time. (GETTY IMAGES)

NOW THIS IS A THROWBACK, SINCE NO ONE ALIVE REMEMBERS THE LOOK.
Club America will play in a super-limited edition 1920s style kit for El Súper Clásico in two weeks. Stylish. // Invent Football

WEIRD, BUT SURPRISING TO NO ONE. GAZZA BEING GAZZA
Not only did Paul Gascoigne party with the Gaddafi boys, he might have put his signature on a piece of military ordinance. Let’s just assume he did. // CaughtOffside

THE 3-6-1 WAS STILL CRAP, AND YOU’LL NEVER CONVINCE ME OTHERWISE.
Some dude named Elliott says Steve Sampson gets a bad rap or some such thing, and the Americans’ France ’98 disaster was a lesson that needed learning. // In Bed With Maradona

PHOTO: UKRAINE’S EYE-CATCHING STADIUM.
The stadium that will host the final of Euro 2012 opened after reconstruction in Kiev. They had fireworks to mark the occasion. (AP PHOTO) 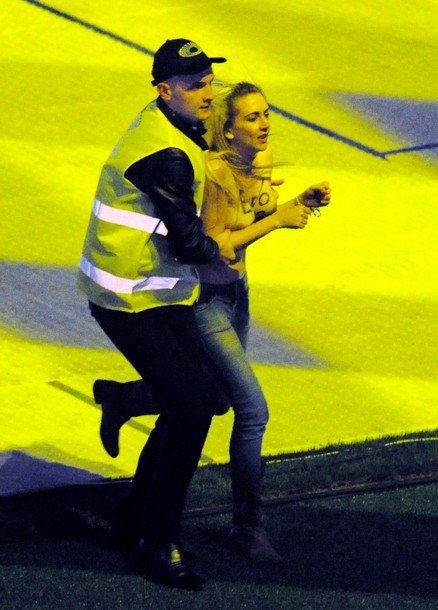 PHOTO: UKRAINE’S EYE-CATCHING PROTESTERS IN THEIR EYE-CATCHING STADIUM.
There to protest on behalf of the Ukrainian feminist group FEMEN was this young woman and her…feminism. (GETTY IMAGES)

THE FINAL WORD PICTURE ON FANATICISM.
An accurate rendering of English football as viewed by the English, in map form. // Surreal Football

LEATHER FURNITURE OUTDOORS IS PRETTY MUCH THE CLASSIEST THING EVER.
Here’s a photo Jogi Loew chillin’ during an interview in Istanbul, in one of those outdoor living room situations. // Kickette

FOR HIS NEXT TRICK, HE’LL PRAISE WENGER WHILE SIMULTANEOUSLY BURNING HIS PHOTO.
Robin Van Persie is totally convinced that Arsenal is headed in the right direction and doesn’t want to leave. But if you’re looking to buy a house, he’s your guy. // Dirty Tackle

‘DOING A SIR ALEX’ SOUNDS LIKE SOMETHING I WOULDN’T WANT TO SEE.
Arsene Wenger should look to Alex Fergurson for inspiration on how to weather a difficult time. // Bleacher Report

DID YA MISS ME?
Thanks to Keith for holding down the QWK KCKS fort while I was away last week. It was almost like I wasn’t gone at all, except for the extra snark and the lingering smell of Philadelphia. Mmm…cheesesteaks and litter.

Be sure to check us out on Facebook and Twitter, keep your eyes peeled for quality KCKRS-worthy items (you know what that is by now, right?) and always remember to tip your waiters and waitresses.