QWK KCKS: Into the Fishbowl

Good luck to Brendan Rodgers, new manager of Liverpool Football Club. I have a feeling he’s going to need it. Not because he’s not capable or because he can’t succeed at Liverpool, but simply because the club exists that weird zone where what should be good enough (based on where the club stands realistically) might not be, and isn’t good enough isn’t exactly clear. If the expectation is that Rodgers will return Liverpool to perennial Champions League participant/Premier League contender in the short term, Rodgers has willingly dived into a hornet’s nest, and the situation will only end in pain. If interested parties (namely, the fans) can accept that “fixing” what ails the Reds will take a bit of time, then Rodgers just might be the best possible thing for Liverpool.

In other words, don’t be Chelsea (even though they won the Champions League and everything is working out great, sorta).

The whole thing is complicated by the failure of King Kenny. It’s a tough pill to swallow when the legend doesn’t live up to his legendary standard. Rodgers has the benefit of following a manager with a poor record, meaning any improvement he makes will paint him a good light; but he also has the poor fortune of replacing a club legend, who can’t help but leave a jumbled mess of internal politics and raw loyalties in his wake.

And what if Rodgers wants to bring in decidedly “un-sexy” players? What if his vision involves names that would not traditionally merit attention from a club as big as Liverpool? Is everyone good if Rodgers signs a player he honestly believes can help the club if that player isn’t transfer hotness?

For Rodgers sake (because we know he knows how to get a team to play good football) and for the sake of Liverpool fans who understand and accept that a return to their previous heights won’t be overnight, let’s hope so. 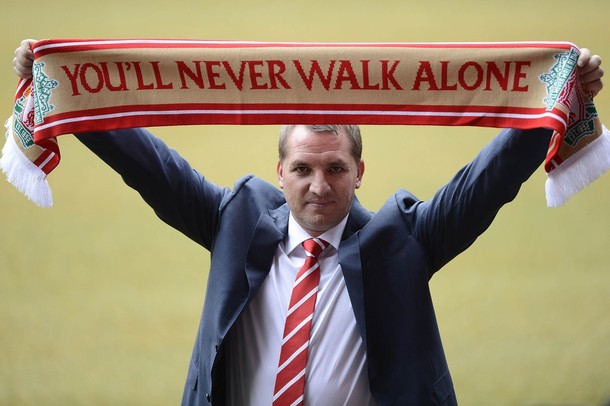 It’s the dawn of a new day at Liverpool Football Club. This should be fun. (Reuters)

Cal FC’s fairy tale run in the U.S. Open Cup will get the full TV treatment from the network that just happens to employ their coach when the amateurs head to Seattle for a match against the MLS Sounders. // Prost Amerika

Big companies are betting that stuff Brazil likes will be big business thanks to the World Cup and Olympics. Now I want a caipirinha. Is it like a mojito? // Forbes

THE PLAYERS SEEM UNPHASED. I’M GOING TO GUESS THIS HAS HAPPENED A FEW TIMES BEFORE.

Montenegro First Division pitch-invading hooligans light flares, score goals, celebrate fat man style. Awesome (with a disclaimer that this looked really dangerous and I’m glad none of the players were injured in any way whatsoever). // 101GG 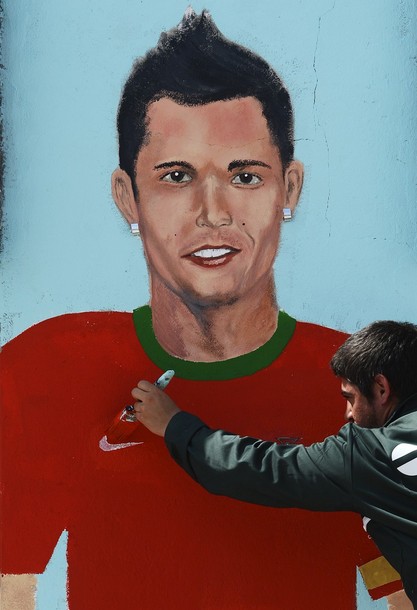 PHOTO: THIS IS THE MOST CRUCIAL BIT. HAVE TO GET IT RIGHT. SWOOSH.

Portugal players and coach Paulo Bento got the graffiti portrait treatment in Obidos from former inmates usually tasked with cleaning up graffiti. (Reuters) 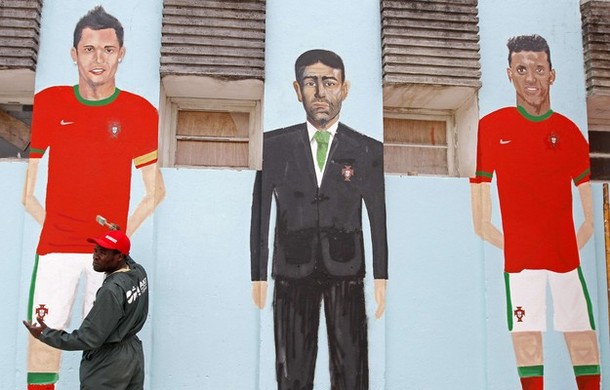 FUTURE NEWS. Most people think Jordan Henderson is terrible, and this prompts UEFA into action. They just won’t stand for it. // Dirty Tackle

THE WAY TO BEAT BRAZIL IS TOTALLY NOT FUN AT ALL. BOO.

Here’s how you beat Brazil, something the United States has only done once, when Kasey Keller turned into a superhero. // US Soccer Players

A BUNCH OF NFLERS WENT TO WATCH SOCCER AND THEY DIDN’T TURN INTO GIANT DIVING BABIES. IMAGINE THAT.

A few of the Redskin took the opportunity to see soccer in their home stadium with the US played Brazil. RGIII would make for a good str – never mind. // Redskins.com 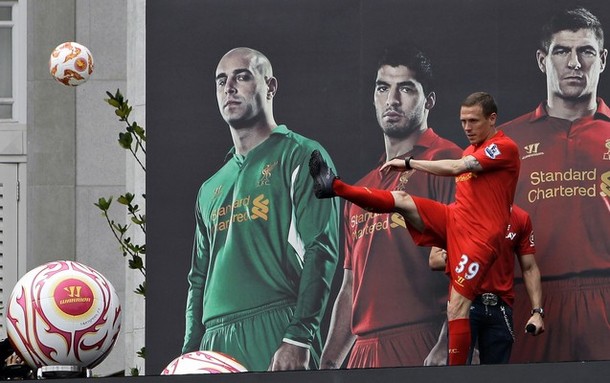 PHOTO: MEANWHILE, IN THE SUPER IMPORTANT NEW MARKET OF THE FAR EAST…

While Brendan Rodgers was being announced as new manager back in Liverpool, Craig Bellamy was in Singapore trying to kick balls onto boats and taking photos with confused young fans (seriously, what’s with the old school Brewers cap?). (Reuters/AP Photo) 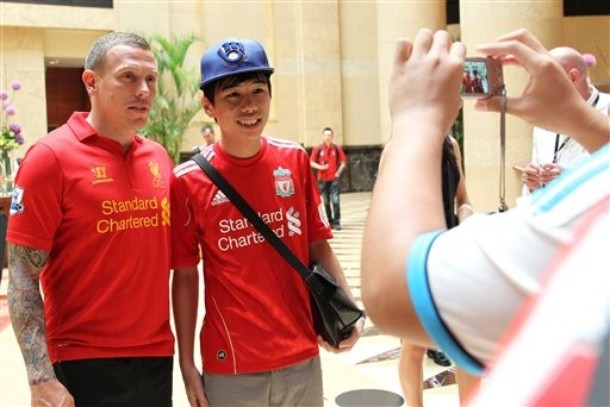 THANK GOODNESS IRELANDS DOESN’T MAKE MORE TOURNEYS, OR THIS GUY WOULD BE DESTITUTE.

Meet the retired Irish policeman who says he’s spent €400,000 following the Republic of Ireland over the years. Also, watch as the comments erupt into a discussion about public sector entitlement. Sheesh. // Independent.ie

SEE? IT BEGINS ALREADY. THERE IS ALWAYS A BETTER CANDIDATE.

ALL REPORTS ARE THAT RODGERS IS OFF TO A FLYING START AT ANFIELD. HIS SCARF-HOLDING WAS ONLY CRITICIZED BY HALF OF THE FANS.

Okay, okay, I take that one back. It’s Friday, so do the wise thing and follow KCKRS on Twitter and like KCKRS on Facebook before we fill your face full of culture and hilarity.

Viggo Mortensen Celebrated A Goal, Was Detained By Airport Security