PHOTO: THINK OF ALL OF THE FINE SWISS BEER YOU COULD FIT IN THERE.

FC Basel players pantomime the “drinking from the cup” routine with a fan-made trophy after finally acknowledging themselves as Super League champions. The Swiss season has been a journey. (Reuters)

DON’T WORRY, THERE WON’T BE A QUIZ. UNLESS YOU WANT ONE. IN WHICH CASE, WEIRDO.

Sometimes it’s important to be serious and to learn things. Today’s lesson involves multiple definitions of the word “debt” and the various ways those definitions apply to the Real Madrid and Barcelona. Yes, it’s long. Yes, there are charts. Read it anyway. // The Swiss Ramble

GOOD: BRINGING A FRACTURED SOCCER PRESENCE UNDER ONE NAME. BAD: INSIPID USE OF ‘FC.’

In media news about the media, ESPN is “fixing” their online soccer coverage with a new brand just in time for Euro 2012. We like ESPN. We have friends there. Moving along, then… // ESPN MediaZone

THE LAST TIME SO MANY PEOPLE CARED ABOUT COMPETING SIDES IN A WAR OF MANCUNIANS, A GALLAGHER HAD JUST BEEN PUNCHED.

Which Gallagher? I don’t remember. Nor do I care. I leave the Oasis obsession to Keith, and he’s on his way to…Manchester right now. What a coincidence. Here’s something about the derby and signs of weakness. // Futfanatico 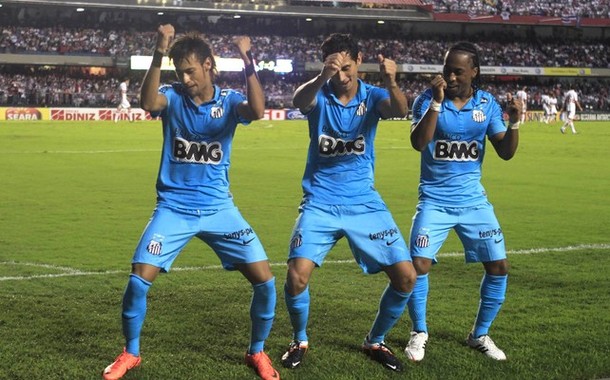 Neymar and friends celebrate with the dance of choice for Lusophone footballers everywhere. (Reuters)

THERE’S A ‘FOOTLOOSE’ JOKE IN HERE SOMEWHERE. EVERYTHING COMES BACK TO KEVIN BACON.

Sometimes, even classy Barcelona players need a reminder to be classy. After Thiago and Dani Alves decided to dance in celebration of Barca’s fifth goal against Rayo Vallecano, Carles Puyol stepped in like a greasy haired John Lithgow. // Dirty Tackle

ONE OF THOSE STORIES THAT MAKES FC UNITED OF MANCHESTER SEEM SO WORTHWHILE.

It costs a lot to have fun in Britain these days, party because football tickets have gone up 184% in the last ten years. Of course, you don’t have to start a new club to avoid Prem prices. You’re mostly out of luck with the cost of beer problem, though. // Bloomberg

MEXICO WANTS TO BE LIKE ENGLAND, WHILE ENGLAND JUST WANTS CHEAPER BEER.

The 18 teams of the Mexican first division voted unanimously to break away from the Mexican FA to form their own version of the Premier League. Hooray for money! // Goal.com 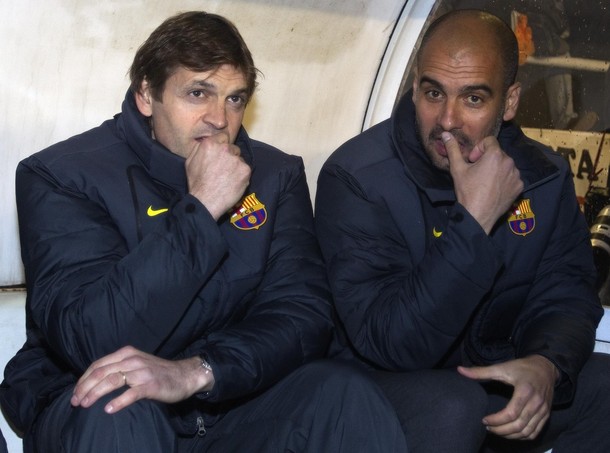 PHOTO: PEP AND TITO. TITO AND PEP. THE KING AND HIS CHOSEN SUCCESSOR.

This is the first of what will definitely be a total of 6.2 million photos you’ll see before the Spanish season is over of Pep Guardiola and Tito Vilanova next to each other. (Reuters)

IN CASE YOU WERE WONDERING, ENGLAND’S EURO CAMPAIGN STARTS IN 42 DAYS. APPARENTLY ROY IS THE ANSWER TO LIFE, THE UNIVERSE, AND EVERYTHING. AHEM.

The FA takes a hard left and decides to take a run at Roy Hodgson instead of presumed choice Harry Redknapp. English papers in a tizzy. // The Guardian

IT’S ALL VERY SERIOUS, THIS RED/BLUE, UNITED/CITY, MANCUNIAN ON MANCUNIAN BUSINESS. SO HERE’S SOMETHING STUPID.

You were just thinking that you needed a slideshow of Alex Song’s many hairdos. Don’t lie. // Bleacher Report

When the dust has settled and only one champion of Manchester stands tall, having won total control of the remaining gas supply in a city decimated by the battle, remember this: Fergie has like a million bottles of wine in his house. Follow us and like us. May the best really really rich club win.

This is ‘Gràcies Pep’, A Book Thanking Pep Guardiola for His Service to Barcelona