QWK KCKS: The Color of Hubris

Introducing…an introduction. Let’s take the opportunity to set the table every KCKRS morning before we launch into the usual collection of footy links. In this space, we’ll frame the day, adding some context to random goodness we usually share.

Today is the Tuesday after the Champions League final. Most of the leagues of Europe have closed up shop, sending their players off to the beach for some much needed R&R. The Continent is silently gearing up for the European Championships, and those players lucky enough to be taking part are forming Voltrons of national soccer pride on practice pitches all over. This means that no one is doing anything good on the internet, and that quality links are few and far between.

PHOTO: THAT GUY TOTALLY RIDES A SPORT BIKE AND WILL DEFINITELY STEAL YOUR GIRLFRIEND.

Montpellier fans celebrate their club’s unlikely Ligue 1 title. And you know which guy I’m talking about. That guy. (Reuters)

HOPE SOLO IS LOOKING FOR LOVE. NO, THIS DOESN’T MEAN YOU. YES, I MEAN YOU, THE PERSON WEARING THE HOPE SOLO T-SHIRT.

Here’s a video of Hope Solo talking about skin care products and her desire to find “new love interests.” Watch you don’t trip. // The Post Game

I’VE ALWAYS WONDERED WHAT COLOR ‘HUBRIS’ WOULD BE.

I FEEL LIKE I’VE BEEN TAKEN ADVANTAGE OF. WHY, I’M NOT SURE.

Twitter match reports. Three of them. Genitalia jokes and Roberto Di Matteo has a puffin face. // The FCF 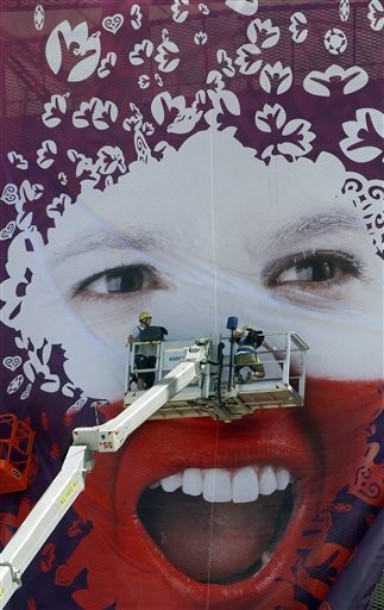 Workers decorate the National Stadium in Warsaw with a banner in preparation for the Euro Championships. (AP Photo)

EVERYTHING YOU NEED TO KNOW ABOUT THIS SITUATION IS SUMMED UP IN DIDIER’S EXPRESSION.

Didier Drogba and some of the Chelsea crew ran into Rihanna at a club in London. It’s not that I’m implying Drogba did anything…untoward. It’s just, you know, Rihanna. // The Sun

THIS IS A STORY ABOUT DOGS PLAYING SOCCER IN KNOXVILLE.

Honestly, these collies need to head to Europe to get some quality training. The American standard just isn’t good enough. // KnoxNews

LOOK AT THAT, THEY HAVE THEIR OWN LITTLE KITS. PROBABLY CUSTOM MADE AND REALLY EXPENSIVE. BAH.

It was bring your kid to work today for Clockwork Orange. These kids are cute and all, but can they do this? (The answer is “yes, probably.”) // Kickette 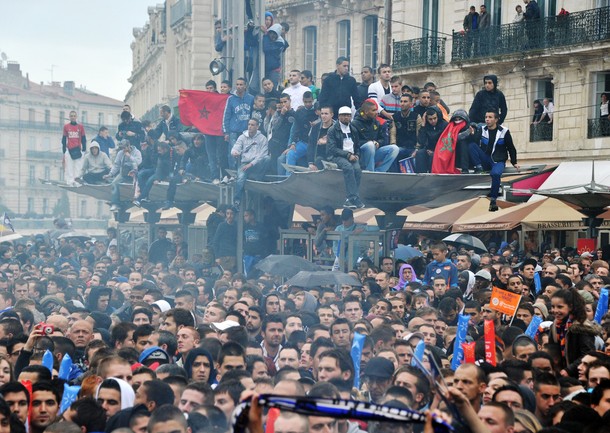 PHOTO: IS THAT STRUCTURE APPROPRIATELY RATED FOR THAT PARTICULAR LOAD?

VIDEO: I THINK YOU MEAN, ‘THEY DID THIS TIME’, ASHLEY. LET’S NOT GET CRAZY HERE.

Ashley Cole has an answer to the stated “fact” that the Germans never lose in penalties.

ESTIMATED TIME ELAPSED BEFORE YOU START LOOKING AT YOUR FINGERS: 13 SECONDS. YOU NEED A MANICURE.

There’s a theory out there that people with certain index:middle finger length ratio make for better athletes (and therefore better footballers). Weird. // Soccer by the Numbers

VIDEO: THIS IS MY FAVORITE THING SO FAR TODAY. KRS-ONE. YES.

Here’s a video trailer for the New York Cosmos Opus with an damn fine soundtrack.

GOLDEN SHOES ARE SO TACKY. TIME TO UPGRADE TO A TASTEFUL PLATINUM.

TODAY WAS A STRUGGLE. PICK YOUR GAME UP, SOCCER PEOPLE, OR WE’RE GOING TO HAVE TO HAVE A TALK.

Just because the club seasons of Europe are over doesn’t mean you get to slack. Soccer never sleeps. Soccer is life. Et cetera, et cetera. We need links, so get cracking. Follow. Like. Feel the joy.