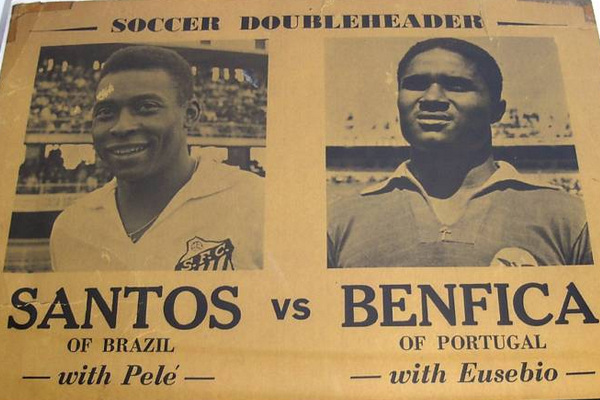 ForÂ Treasures of eBay we wade through mountains of bollocks on eBay to bring you an auction worth checking out.

Today’s item is a 1968 soccer poster promoting a match between Pele’s Santos and Eusebio’s Benfica at Yankee Stadium on September 1, 1968 with a “Buy It Now” price of $3,900.

In 1968, Pele was at the height of his powers, both with the Brazil National Team and his club side, Santos. Eusebio was one of Europe’s biggest stars, having just won the Golden Boot as the continent’s top scorer. This poster promotes a match between Santos and Benfica at Yankee Stadium as a showdown of Pele v. Eusebio. That would be like promoting a World Football Challenge match of Manchester United v. Barcelona as Rooney v. Messi, and making posters to match.

The game itself ended in a 3-3 tie, though neither star scored. Almost 37,000 people showed up at the stadium in the Bronx to see the game. I wonder how many arrived early for the front end of the double-header, an NASL (in the first year of the league) match between the New York Generals and the Detroit Cougars. The jump in quality must have been massive.

This is cool, if freaking pricey, American soccer history. Both Pele and Eusebio would later play in the NASL, so the ’68 game was like a preview of sorts.

Barcelona Tries to Train on the National Mall, Gets Told Off By Park Ranger